HMS Sherwood, the East Midlands’ only Royal Naval Reserve unit, are set to receive the Freedom of the City of Nottingham a rare honour presented by Nottingham City Council.

The official scroll presentation to mark the occasion will take place at Nottingham City Council’s Full Council next Monday 14 May, which will then be followed by a Freedom Parade in Nottingham in summer this year.

The Freedom of the City is an honour reserved for military units and gives the unit being awarded the opportunity to march through Nottingham, something that is being planned to happen in a few months’ time.

Although the date of the Freedom of the City event is yet to be finalised, members of the public will be invited to see the military parade as it makes its way through Nottingham. 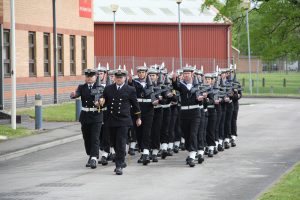 Lieutenant Commander Rod Grant from HMS Sherwood explained: “We are immensely proud to receive the award. To receive this fantastic accolade is extremely rare, particularly for a Royal Naval Reserve unit like HMS Sherwood.

“We plan to march through the city with the Band’s drums beating, colours flying, and our bayonets fixed. It would be great if members of the public do turn out to support us, we will be publicising the route of the parade closer to the time so people will know where to stand to witness this special day.”

Cllr Brian Grocock, Nottingham City Council’s Armed Forces champion, said: “The granting of the Freedom of the City is a ceremonial honour, and the oldest and highest civic honour that can be bestowed on a military unit and it is such an honour and privilege to be part of this momentous occasion.

“I would encourage residents, business owners and visitors to come and embrace the event and enjoy the background of our beautiful city while supporting the sailors.”