HMS Sherwood, the East Midlands’ only Royal Navy Reserve (RNR) unit, were officially granted the Freedom of the City of Nottingham last night (14 May) as a scroll was presented to them by Nottingham City Council.

The official scroll presentation happened at Nottingham City Council’s Full Council meeting, although this rare honour will be formally celebrated by parading through Nottingham on 2 June.

The Freedom of the City parade will see 58 HMS Sherwood reservists be joined by the Royal Marines Reserve, Sea Cadets, veterans and The Band of HM Royal Marines Portsmouth. 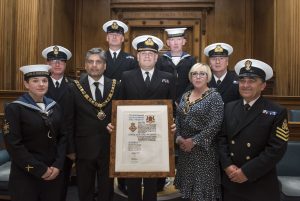 streets as the military drums are beating, the colours are flying and the reservists’ bayonets are fixed.

Lieutenant Commander Rod Grant from HMS Sherwood explained: “The parade route will be publicised closer to the time but it would be great if members of the public do come out to support us. All of our ships company are proud to be a part of such a special event.

“Achieving the Freedom of the City is both the oldest and the highest honour that can be bestowed on a military unit and I know that personnel who currently, and have previously, served alongside us are delighted that this accolade has been achieved.”

Cllr Brian Grocock, Nottingham City Council’s Armed Forces champion, said: “The Freedom of the City is the highest honour that the city of Nottingham can bestow. It is symbolic of the esteem that the city holds for HMS Sherwood and it is one of our oldest surviving traditional ceremonies.

“We, as the city are honoured and proud to celebrate these sailors with the Freedom and we look forward to seeing them on parade through our city. We would encourage everyone to come and support the march and cheer on the sailors.”