Croatia’s Vekic shocked the World. No.11 Konta in the final last year when she came from a set down to win the grass court event in front of a sell-out crowd at the Nottingham Tennis Centre. 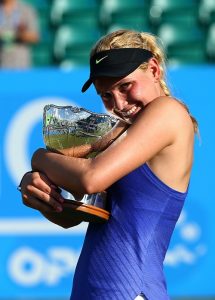 World No.50 Vekic, who at only 21 is one of the hottest prospects on the women’s tennis circuit, said:

“I’m so excited to be returning to Nottingham in the summer. It was such an incredible feeling last year to win the event and lift the prestigious Elena Baltacha Trophy in front of a packed centre court crowd.

“I had such a great experience and thoroughly enjoyed my time at the tournament so I’m really looking forward to getting back out on the grass courts and having the chance to defend my title.”

The Nottingham Open returns 9 – 17 June 2018 and as the men and women’s tennis combine for one week only, fans are in for an action packed week. So don’t miss out on the chance to watch some of the world’s best male and female players on court, tickets on sale now!

Tournament Director Rebecca James, added: “To have our British No.1 and defending champion confirmed for the summer is great news, not only for the tournament but for the fans who will be guaranteed another year of thrilling matches.

“Last year’s spectacular final between these two talented players in front of a sell-out crowd was the perfect ending to the tournament. With the Friday, Saturday and Sunday all sold out, we saw record attendance and hope to build on this success for 2018 with another star-studded player field.”

Situated in the leafy suburbs just minutes from the city centre, the Nottingham Tennis Centre will once again play host to this prestigious pre-Wimbledon tournament.

Kids go free on Qualifying Weekend (Sat 9 and Sun 10 June) and adult tickets are just £5, so families can enjoy a fun-filled day of off-court activities while watching some of the world’s top players on-court compete for their place in the tournament.

Tickets go on sale today and prices start from £3. To find out more about the Nottingham Open or to buy your tickets go to https://www.lta.org.uk/major-events/nottingham-open/