Nottingham has marked the centenary of women being given the right to vote on 6 February 1918. 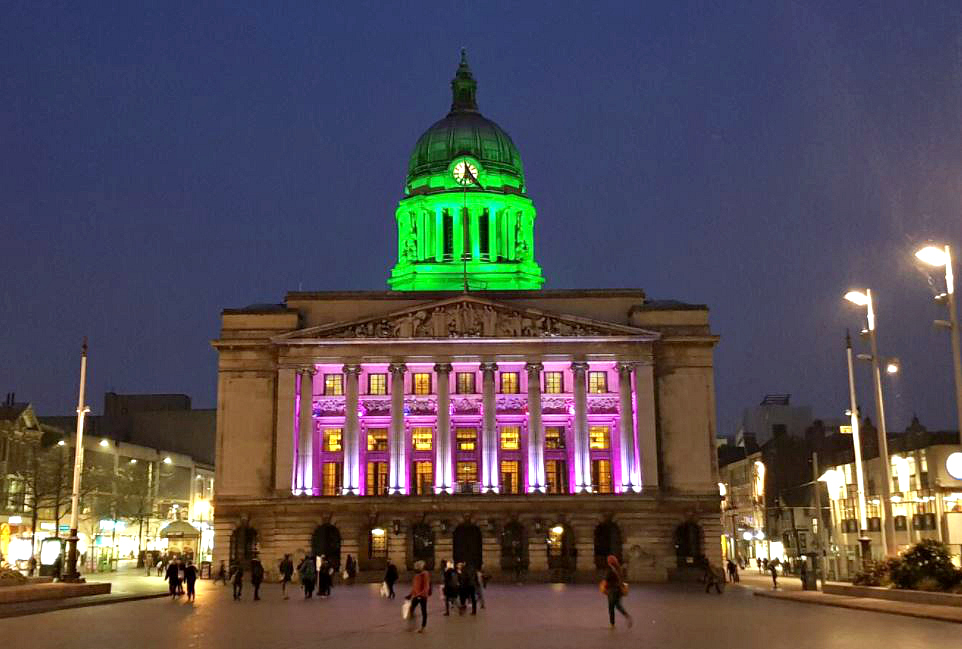 The Council House was lit up in purple, white and green – echoing the colours worn by suffragettes to advance their cause, as figures from local women’s organisations involved in Nottingham’s Centenary Cities project met to mark the anniversary.

In December, along with six other UK cities, Nottingham was given a share of £1.2million by the Government to mark the anniversary of (some) women gaining the right to vote.

Nottingham City Council put in a winning bid to become one of the cities, based on the city’;s strong links to the suffragette movement.

The ‘Centenary Cities’ programme forms part of the Government’s wider plans to promote this pivotal moment in history, including the addition of the first female statue in Parliament Square – Millicent Fawcett – due to be unveiled in 2018.

The 100 year anniversary kicks off a programme of events celebrating Nottingham’s unique history of suffrage whilst also exploring what suffrage means in the city today. Local people are encouraged to get involved in the project, by:

Cllr Linda Woodings, Executive Assistant for Communications and Community Safety, said: “I’m excited and proud that Nottingham’s celebrations of a century of women’s suffrage have kicked off with the Council House being lit up to mark the occasion.

“I hope lots of people in the city join us in celebrating the pioneering efforts of local women in achieving the vote – and encouraging young people, and especially women today, to register to vote and play an active role in politics.”

A short history of suffrage in Nottingham

By the early 1900s, women had been campaigning for the vote since the 1860s. Governments repeatedly promised women the vote, then went back on their word

1907 – A Nottingham branch of the Women’s Social and Political Union WSPU is founded, calling on women to take direct action to advance the cause – including civil disobedience. The Nottingham leader, Helen Watts, was imprisoned twice

1910s – Large crowds gathered in the Market Place and on the Forest to hear suffragette and suffragist speakers.

February 1913 – Radical protests ramp up in Nottingham – black fluid was poured into post boxes across the city, followed by a wave of window smashing from Goldsmith Street to Sherwood ‘Votes for Women’ stickers were found at each incident

May 1913 – Suffragettes are responsible for the spectacular burning down of the Nottingham Boat Club on 12 May, watched by an eager crowd from the safety of Trent Bridge.

The first world war – Nottingham women go to work in transport, engineering, mills and factories for the war effort. In Chilwell,  the  ammunition factory was the country’s most productive shell filling factory with 10,000 workers. 134 people died in the 1 July 1918 explosion

1928 – Suffrage is extended to all women