Anyone wanting to catch any of this summer’s outdoor theatre performances is urged to book their tickets, as some popular shows are selling out. 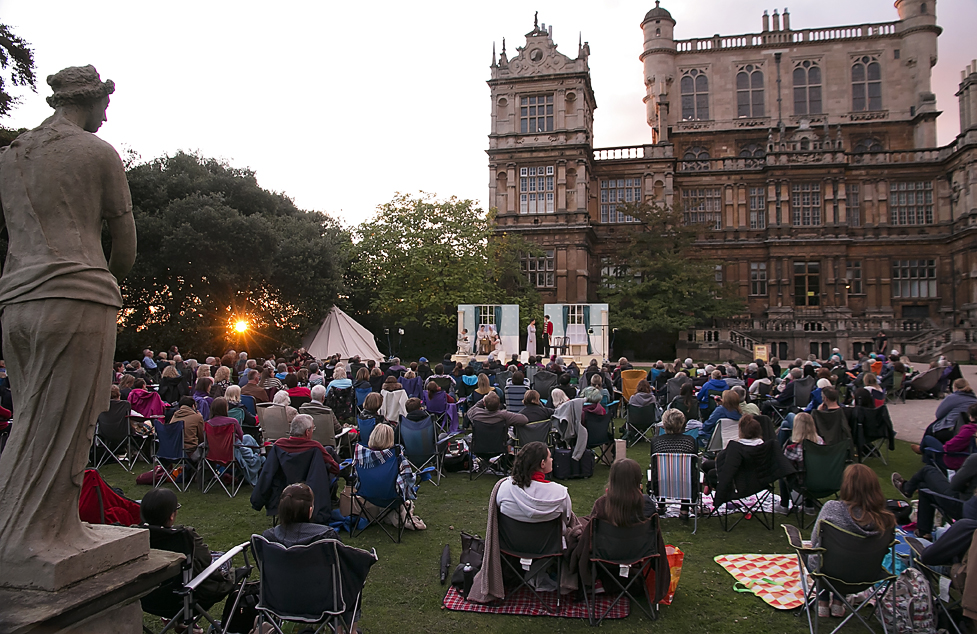 Nottingham City Council’s outdoor theatre programme has been up and running for a month now, with audiences taking advantage of the wonderful weather and snapping up tickets for some new and exciting shows as well as the much-loved and traditional performances. Several shows have sold out so advice is to book tickets while they are available.

What could be better than live theatre on a summer’s evening with the stunning backdrop of Wollaton Hall and Newstead Abbey?

From Sunday 15 July, there are still ten amazing shows to enjoy. From the epic Shakespearean extravaganza, A Midsummer Night’s Dream, to an alternative adaptation on the great classic, Pride and Prejudice – there really is something to appeal to everyone.

As the productions are designed to appeal to all audiences it doesn’t matter whether it’s date night, celebrating a special occasion or just fancying a little culture; the invitation is to book tickets and bring a hamper and blanket to one of these iconic venues for a great summer evening out.

Gates will open one hour before each performance to enable people to enjoy the grounds beforehand. Shows will only be cancelled if it is considered too dangerous to continue, not because of bad weather, so please dress accordingly. Please note for safety reasons, barbecues are not permitted.

Councillor Dave Trimble, Portfolio Holder for Leisure and Localities, said: “We are delighted to see the success of this year’s Outdoor Theatre programme. There is something for everyone with a great variety of performances which provide the perfect opportunity to make the most of the summer evenings. Don’t miss the chance to catch one of these extraordinary events.

“Come and spend time with friends and family in the beautiful surroundings of Newstead Abbey and Wollaton Hall but do book early as some shows are already sold out.”

For more details and to book tickets visit: goo.gl/KDdPWg

Thursday 19 July
Gates Open 6pm Performance Starts 7pm
The Adventures of Robin Hood
See Chapterhouse Theatre Company’s Robin Hood and his band of merry men who are feared by the richest of the land as they travel through Sherwood Forest stealing from the rich to give to the poor.

Saturday 28 July
Gates Open 6pm Performance Starts 7pm
The Importance of Being Earnest
The Pantaloons Theatre Company
Everybody loves Ernest. In fact, Cecily and Gwendolen are both engaged to Ernest. The only trouble is, Ernest doesn’t exist. Or does he…?

Sunday 29 July
Gates Open 6pm Performance Starts 7pm
Dr Dolittle
Dr John Dolittle starts out as a human doctor, but once he is taught by his wise old parrot Polynesia how to talk to animals he becomes the most celebrated veterinary doctor in England. A funny, much-loved and exciting adventure performed by Illyria Theatre Company

Sunday 19 August
Gates Open 6.30pm Performance Starts 7.30pm
The Hound of the Baskervilles
Who killed Sir Charles Baskerville? Can anyone prevent the same fate befalling the young Sir Henry Baskerville? The original and greatest literary detective of them all, Sherlock Holmes, and his assistant Doctor Watson, tackle the most baffling case of their careers. Performed by Illyria Theatre Company

Friday 27 July
Gates Open 6pm Performance Starts 7pm
Pirates of Penzance
With hilarious drama, sharp satire and glittering wit, “The Pirates of Penzance” is as fresh as if it had been written today. It is packed-full of memorable songs such as “To be a Pirate King!”; “Modern Major General” and “A Policeman’s Lot is Not a Happy One”. Performed by Illyria Theatre Company

Saturday 4 August
Gates Open 6pm Performance Starts 7pm
As You Like It
With the Pantaloons Theatre Company “All the world’s a stage, and all the men and women merely players…” Welcome to the Forest of Arden, a world of clowns, lovers, runaways and rebels.

Friday 31 August – SOLD OUT
Gates Open 5pm Performance Starts 6pm
The Midnight Gang
When everyone else is sweetly sleeping, they gather in the middle of the night in the name of magic, mischief, and memory making. Join Heartbreak in the adaptation of David Walliams’ bestseller. Performed by Heartbreak Productions.