I INFINITE is an extraordinary blend of dance, music and digital design which will be performed at the Council House from Thursday 15 to Saturday 17 November.

Set in a white, digitally animated environment; the performance is inspired by the digital world’s quest to recreate life. Part dance, part video installation, it explores the boundaries between the artificial and the real, the digital and the organic worlds. 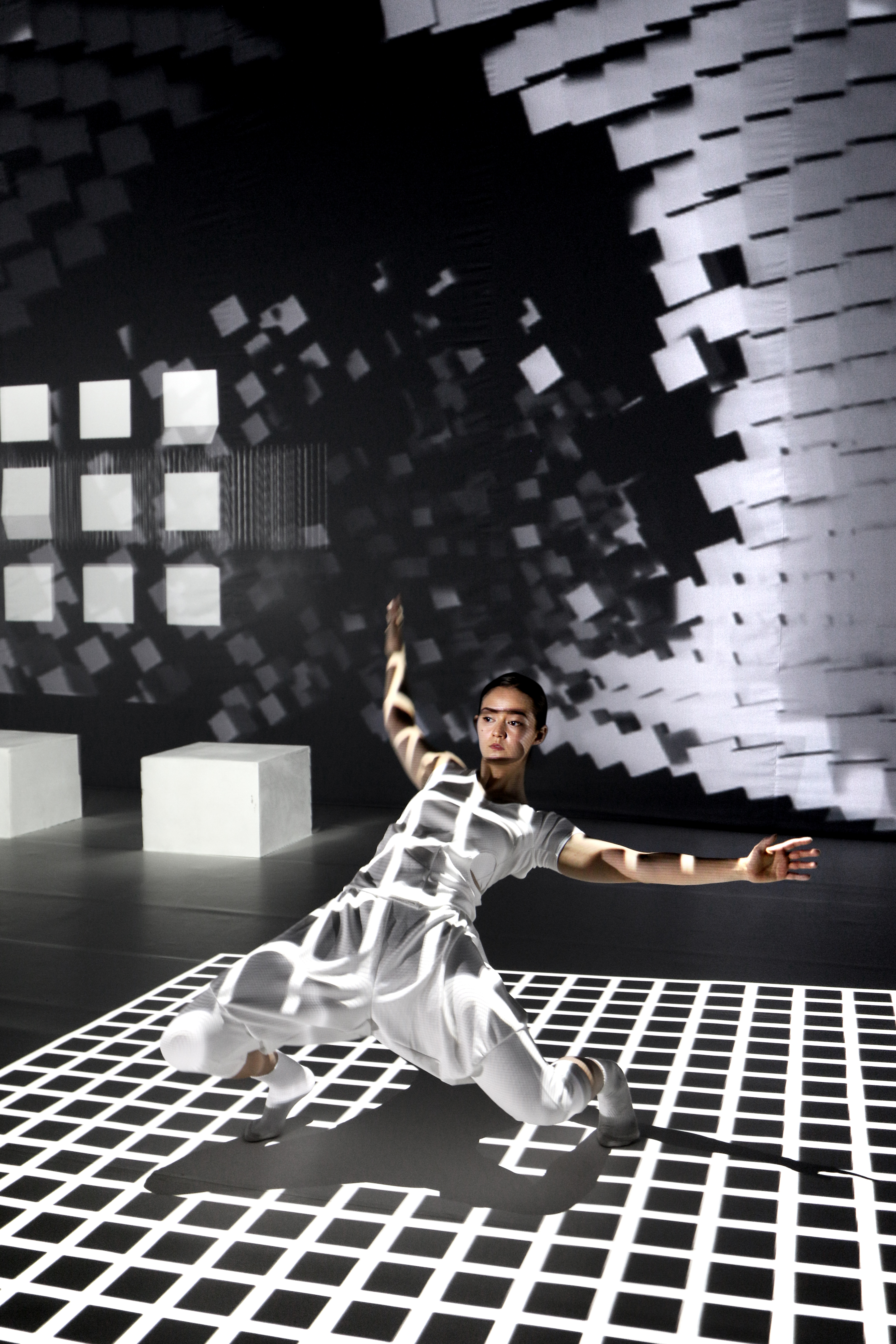 A solo dance piece, the audience will watch the show performed in a white cube space. Viewers are free to roam the space, to stand close to the dancer or just sit, transfixed, to watch the refined movement so often missed in more traditional theatre spaces.

Touring the UK to rave reviews, I INFINITE will perform twice each day – at 7pm and 8.30pm. Each performance lasts one hour. Tickets cost £11 with £8 concessions or a  special family ticket for £32 admits 2 adults and 2 under 18s.

I INFINITE is produced by Nottingham choreographer Tom Dale. The Tom Dale Company (TDC) is one of the UK’s leading contemporary dance companies. Combining dance, electronic music and digital media, TDC is a leader in the field, producing world-class work which is simultaneously bold, exciting and constantly evolving.

Tom said “I was inspired by robotics, artificial intelligence and how the digital world is moving on an increasingly fast trajectory towards lifelike manifestations. How does the digital explore and master this physical world from its finite perspective? What would a robot or A.I. need to understand or learn in order to move in a human-like way.”

This performance is another in a series of events aimed to make the iconic civic building accessible to more people. Thousands walk past the Old Market Square landmark every day and Nottingham City Council is hoping to encourage more visitors to stop and take a look inside. Following the success of the Halloween event, there will once again be a pop-up bar inside the Council House from 6.30pm to 9.30pm. It will sell wine, Prosecco, beer and soft drinks and will be cash-only.

Thursday’s performances of I INFINITE are already sold out but tickets can be bought for Friday and Saturday via the Dance 4 website: https://www.dance4.co.uk/events.

Cllr Dave Trimble, Portfolio Holder for Leisure and Localities said “We are looking forward to welcoming the I INFINITE team to the Council House this week and hope as many people as possible take the chance to come and see this amazing performance in very different surroundings. I would also urge anybody looking for a unique event venue to get in touch with the Council House events team.”

I INFINITE is Nottingham Libraries in partnership with Dance4 and the Tom Dale Company brings you I INFINITE.

Anyone interested in holding events and weddings at the Council House, or to make suggestions for potential future activities at the venue, is asked to call 0115 876 5657 or email CouncilHouse.Events@nottinghamcity.gov.uk

Tom Dale
Tom Dale graduated from Laban, winning the centre’s Award for Outstanding Achievement in Choreography. He danced with leading choreographers and companies, including Mathew Bourne’s Adventures in Motion Pictures, before focusing on creating his own work and forming Tom Dale Company. It is here that Tom is able to pursue his artistic vision, bringing together artists to collaborate on bold, exciting, innovative projects that interrogate art in motion and have a particular synergy with the digital arts and electronic music.

As well as creating all of the company’s work to date, including critically acclaimed pieces Rise, I Infinite, Refugees of the Lost Heart and Digitopia, Tom has created A New Chimera for Fertile Ground, Dark Clouds are Smouldering into Red with Sinfonia Viva, Subterrania which was part of In the Dust for 2Faced Dance Company, Dance Please produced by TPO/Crying Out Loud/Theatre Is and I am a believer for artist Reza Aramesh. Tom also leads educational projects throughout the UK and internationally, working with Sinfonia Viva, all of the UK’s major conservatoires for dance and for National Centres for Advanced Training.

Jemima Brown
Jemima Brown was born in Belfast, Northern Ireland where she began her training in ballet, Irish dancing and musical theatre. Before moving to London in 2012, Jemima had the opportunity to work with Hofesh Shechter as part of the U.Dance Ensemble, performing Tank at The Royal Festival and Queen Elizabeth Hall.

She went onto study at London Contemporary Dance School, attaining a first class BA (Hons) in Contemporary Dance. Throughout her three years of training she worked with many highly acclaimed artists including Crystal Pite, Didy Veldmon, James Cousins and Kerry Nicholls to name a few.

Since graduating, Jemima has worked with Joss Arnott Dance performing a UK tour of 5/0 alongside world-renowned musician Dame Evelyn Glennie. She has also worked with Avant Garde Dance, playing the role of Oliver in Fagin’s Twist  in collaboration with Tony Adigun and The Place. Other projects include work with Sally Marie, Didy Veldmon and Antoine Marc.

Maja Naomi Furnes
Maja was born in Norway and trained in ballet, jazz and contemporary dance. She completed her BA at the Oslo National Academy of the Arts.

Since graduation, Maja has worked in several projects in Norway for TV and stage such as Peer Gynt at the Norwegian National Opera & Ballet, Oslo Dance Ensemble and a community project at the Bærum Kulturhus.

In 2015 Maja had the opportunity to work for Hofesh Shechter in his young company Shechter II followed by a European tour. After premiering in Paris, the company was awarded the La Grand Prix de la Critique de la Danse. During her time in the company, Maja also had the opportunity to perform alongside the Hofesh Shechter Company at the Royal Opera House in London with Orphée et Eurydice, which later restaged at Teatro alla Scala in Milan in 2018. Maja is now performing I Infinite for Tom Dale Company.

About Tom Dale Company
Tom Dale Company (TDC) is one of the UK’s leading contemporary dance companies. Combining dance, electronic music and digital media, TDC is a leader in the field, producing world-class work which is simultaneously bold, exciting and constantly evolving. Our award-winning participatory activities for young people deliver exceptional transmedia programmes across Nottinghamshire and further afield. The synergy between dance and the digital arts is the major artery pumping through TDC’s practice. It is woven into all our programmes of work. The company’s vision, through its collaborations with the digital arts, is to re-imagine dance. Collaboration is key to our creative process. We explore new ideas, aesthetics and techniques with an exceptional team of dancers, digital artists, electronic musicians, poets, writers, designers and visual artists.

I INFINITE was originally co-produced by Dance4 with support from Nottingham Lakeside Arts, Déda, DanceDigital and Arts Council England.