… in Nottingham, Birmingham and Eastbourne

The Lawn Tennis Association (LTA) announced today that British star Johanna Konta has confirmed her intention to play at the Nottingham Open, Birmingham Classic, and Eastbourne International in the lead up to Wimbledon. 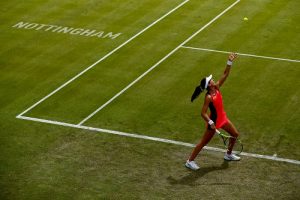 Konta, who headlines a strong GB Fed Cup team for next week’s tie in Estonia, enjoyed some stand-out performances in 2017 including: winning the Miami Open, finishing runner-up at the Nottingham Open, becoming the first British woman to reach the Wimbledon singles semi-finals since Virginia Wade in 1979 and reaching a career high ranking of World No.4, and will be looking to build on this for 2018.

Speaking on the announcement Konta said: “I’m so excited to be returning to play these fantastic tournaments in the summer.

“The grass court season is one of my favourites and nothing compares to competing at home with passionate fans, friends and family who are behind you all the way. I know I’m incredibly lucky to have the opportunity to compete in front of a home crowd and especially in Eastbourne where my family home is just a stone’s throw away from Devonshire Park, it’s such a special feeling.

“These tournaments also provide me with the perfect pathway to Wimbledon. Last year it proved to be the best preparation possible as I enjoyed my most successful Wimbledon ever, and hopefully it will have the same effect for 2018.

“As always I know there will be a really strong player field at Nottingham, Birmingham and Eastbourne and I’ll face some tough opponents in competitive matches, but I can’t wait to get on court and fly the flag for British tennis.

The LTA’s Director of Major Events, Oliver Scadgell, said: “After a fantastic 2017 which saw all our grass court events deliver record ticket sales and excellent player fields, 2018 is about building on that success and making our tournaments even bigger and better.

“We’re absolutely delighted to welcome back the British No.1 and World No.11 to play at our pre Wimbledon WTA British grass court events. Not only is Johanna a world-class player, but she’s a crowd favourite and is certain to receive a warm welcome in Nottingham, Birmingham and of course her home town of Eastbourne.”

Tickets for the Nottingham Open, Birmingham Classic, and Eastbourne International will be available from 10:00am on Friday 9 February from www.lta.org.uk/majorevents