New eco-friendly taxi cabs and a smartphone app for hackney cab passengers have been launched in Nottingham.

Nottingham City Council  unveiled models of next-generation taxi vehicles on March 1 which it wants the city’s whole fleet of hackney cabs to convert to in the forthcoming years. The first of the new electric cabs – an LEVC (London Electric Vehicle Company) e-city vehicle – and a cleaner diesel Mercedes Euro VI were revealed in the Old Market Square, in a new black and white livery being considered as an option for the fleet.

Alongside this, the mytaxi app was launched in Nottingham – the first city outside London to get the free smartphone app, which puts people just two taps away from a licensed taxi, and lets drivers get more passengers when they want them.

Mytaxi is Europe’s largest e-hailing app, operating in over 70 cities and used by almost 80% of London’s black cab drivers. To celebrate the launch, mytaxi will be offering 50% off all trips throughout March in Nottingham for both new and existing users. Launched in 2009, mytaxi is the leading e-hailing app in Europe, available in over 75 cities within 11 countries. Four mytaxi trips are accepted every one second around Europe through the network of over 120,000 drivers and more than ten million downloads.

In partnership with Nottingham City Council, the launch will provide not only skilled and knowledgeable drivers but a guarantee of safe, reliable, convenient and cost-effective travel for Nottingham’s residents.

The moves are part of a drive by the City Council to bring the city’s taxi service into the 21st century and up to the standards of Nottingham’s world-class integrated public transport system. Low emission trams and buses are already playing their part in improving the city’s air quality – now the fleet of over 400 hackney cabs are set to become Ultra Low Emission Vehicles (ULEV) or Euro VI (cleanest diesel) by 2020 to help the city achieve air quality standards and support any potential Clean Air Zone. These vehicles offer drivers fuel cost savings of up to £100 a week.

The council will be placing orders for a small number of stylish new Ultra Low Emission Vehicle (ULEV) models to lease back to drivers, as well as investing £700,000 of Government funding into a network of electric charging points around the city.

Portfolio Holder for Community and Customer Services, Councillor Toby Neal, said: “New low-emission taxis along with a user-friendly e-hailing app will bring our taxi service up to the high passenger and air quality standards as the rest of our superb transport system in Nottingham.

“We’re pleased to have teamed up with mytaxi to offer local hackney passengers a modern, easy way to book taxis as well as extra confidence about journey safety. And we’re looking forward to a time when all our hackney cabs are low emission vehicles so that everyone in the city can benefit from cleaner air.” 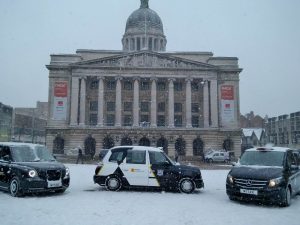 Andy Batty, UK General Manager at mytaxi, commented: “We had an incredibly strong 2017 and it couldn’t be a more exciting time for mytaxi, kicking off our UK expansion in Nottingham. As a Nottingham native, the city is particularly close to my heart, so I’m thrilled that we are investing in the drivers of Nottingham to provide a service that not only provides exceptional local knowledge but also a safe pair of hands behind the wheel for you, your friends and family.”

Nottingham mytaxi driver ambassador, Kaleem Ashraf commented: “I’m excited to get started using the mytaxi app as think it’ll change my day to day. It means I should have access to more customers who are readily available instead of the unpredictability of street hailing. It’s easy to use, and will give us more detail about the people we’re picking up too which will make it mutually beneficial for both us and passengers. It’s great to see an investment in the knowledge and skills of black cab drivers outside of London too.”