HMS Sherwood, the East Midlands’ only Royal Naval Reserve (RNR) unit, has exercised their right to parade through Nottingham after the award of the Freedom of the City by Nottingham City Council.

Freedom of the City is an honour reserved for very few military groups and gives the unit awarded an opportunity to march through the city awarding the honour, in this case Nottingham on 2 June.

The parade saw reservists from HMS Sherwood be joined by local Sea Cadets, members the Band of HM Royal Marines, Portsmouth (Royal Band) and veterans who have served with the Royal Navy in years gone by.

The veterans who took part all have an association with Nottingham, either having served on board the previous Type 42 destroyer of the same name, or were attached to HMS Sherwood in the past.

Reservists marched through the city with their swords 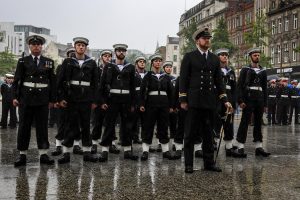 drawn, bayonets fixed, bands playing and colours flying, as members of the public applauded the spectacle of the military parade as it made its way through the City’s streets.

The tradition of conferring the freedom of a town or city dates from when fortress walls were necessary to protect its inhabitants from outlaw bands and the attacks of feudal lords. Bodies of armed men were often refused entry into the town unless the citizens were confident that they meant no harm.

The granting of permission for an armed body of men to enter a town became a mark of trust and confidence in which the citizens held the unit. To be granted freedom of a town or city is the greatest honour that can be bestowed on a unit within the Armed Forces.

Lieutenant Commander Rod Grant HMS Sherwood’s Operations Officer helped to organise the event. He explained: “After many months of planning and coordination with Nottingham City Council and other agencies it was great to see the Ship’s Company finally parade through the city which they have been based in for so long.

“Everyone was obviously enjoying themselves and they received a warm welcome from crowds that had taken the time and effort to support their region’s own naval unit”. 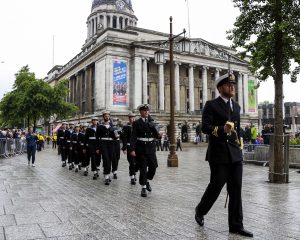 HMS Sherwood’s Commanding Officer, Commander Rob Noble, said: “This is a great honour for HMS Sherwood. My entire ship’s company are immensely proud to be the recipients of the Freedom of the City of Nottingham. This marks nearly 70 years of Naval Reserve association with the great city of Nottingham and I am sure many more to come.”

Cllr Brian Grocock, Armed Forces Champion for Nottingham City Council, said: “It was a proud day for Nottingham and it was great to be there to witness the parade.

“I think the event showed the appreciation that the people of Nottingham have for our Armed Forces and we are especially proud to have HMS Sherwood as part of our community.

“As a city we’re honoured to grant the Freedom of the City to these sailors and it was lovely to see people out in the city cheering them on, as they exercised their right to march through our city.”