The Leader of Nottingham City Council has condemned yesterday’s attack near a synagogue in Germany and expressed his sympathy and support for Nottingham’s Jewish community.

“The awful attack in Halle tragically left two people dead. It seems clear it was motivated by anti-Semitic views, which is something we wholeheartedly condemn. Nottingham, together as a council and a city, stands against terrorism and in support of all those who suffer its tragic consequences.

“My thoughts are with those who lost their lives and their loved ones, and also with our Jewish community in Nottingham who will of course have been particularly affected by the incident, which came on their holiest day.”

The City Council has today unveiled some artwork designed by local people as a temporary display, on the former National Videogame Arcade building in Hockley, to raise awareness of hate crime and bring Nottingham people together. People are encouraged to show their support by taking their photo with this display and sharing it on social media using the hashtag #NottinghamTogether 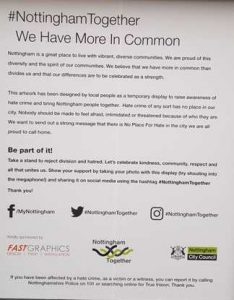