Home / Featured / Things are looking up for historic dome murals

Nottingham’s famous outlaw was renowned for being a master of disguise – but work is underway to put him back in plain sight, right next to the Sheriff of Nottingham’s office!

Robin Hood is depicted on one of four murals that hundreds of shoppers pass beneath every day, and which are now being fully restored after years of damage.

The artwork is located in the dome of the Exchange Arcade shopping centre, to the rear of the Council House where the Sheriff’s Parlour is located. The murals feature the Danes capturing Nottingham in 868, William the Conqueror ordering the building of the castle in 1068, King Charles I raising his standard at the start of the Civil War in 1642 and Robin Hood and his Merry Men

Each fresco mural is the work of a local Nottingham artist Noel Denholm Davis (1876 – 1950), assisted by Mr Hammersley Ball, and was carried out in 1928. Sadly, the condition of these murals has deteriorated in recent years, largely through water damage. The Robin Hood mural has been severely damaged in this way, disguising its fine features and vibrant colours.

It’s also thought that the artist used local celebrities as 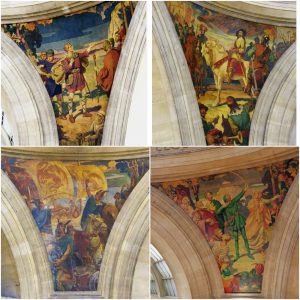 Not only is the grade II* listed building classed as one of special architectural and historic interest, but so are the murals, which are considered to be an exceptional example of early 20th century civic architecture.

Now a specialist restorer has set to work to bring these murals back to their former glory, with the restoration due to finish in the summer.

Cllr Jane Urquhart, Portfolio Holder for Planning, Housing and Heritage, said: “These murals are a part of Nottingham’s history and we need to protect them. We are working with a great and experienced restorer, who is undertaking a complete restoration of the damaged murals and we can’t wait to see the final result.”

The Exchange Buildings were built between 1927 and 1929 as part of a major civic building project which included the Council House.

Originally, the mall was mainly occupied by Joseph Burton, who operated an upmarket food emporium similar to London’s Fortnum & Mason. By the early 1980s the centre, locally known as Burtons Arcade, was in need of updating. A major refurbishment was carried out to provide 17 retail units in high quality, atmospheric surroundings.

Restoring these murals are just one of the many ways the council are protecting and preserving the city’s history.

For example, Nottingham was named one of the country’s first ten ‘Heritage Action Zones’ by Historic England. The five-year scheme, worth up to £2.7m, will revitalise the city centre and breathe new life into some of the city’s neglected historic buildings and sites, bringing them back into use as housing or retail spaces, and transform the city centre’s ‘at risk’ conservation areas.

Some of the areas being targeted for regeneration are: Old Market Square and Lace Market, home to the city’s Creative Quarter, which were both added to the Register of conservation areas at risk in 2016; and Sneinton Market, popular with new start-ups.

There is also the council’s Heritage Strategy, which sets out aims and ambitions for the city over the next 10 to 15 years for heritage-led restoration and regeneration projects. One of these is the work underway to restore the gateway of the city, thanks to Heritage Lottery Funding of £682,400 for the Carrington Street Townscape Heritage scheme.

The money is financing grants of up to 80 per cent of the cost of building works to restore eligible properties on Carrington Street, Arkwright Street and Station Street, uncovering or reinstating original Victorian and Edwardian features, faithfully restoring shop fronts and allowing unused upper floors to be brought back into use.