Nottingham City Council has secured over £5million through the European Regional Development Fund (2014-20) to roll out its Energiesprong, ultra-low energy homes pilot, which will include improvements to over 150 Nottingham City Homes’ (NCH) properties. The scheme will tackle some of NCH’s older housing stock that is hard to heat, lifting residents out of fuel poverty. As well as being warmer, the environmental performance of the homes will be greatly improved reducing carbon emissions and improving air quality.

Energiesprong is a ground-breaking whole-house renovation approach, pioneered in the Netherlands. It upgrades a home with innovative energy-saving and energy-generating measures, which include new highly insulated outside walls and windows, a solar roof, and a state of the art heating system. The household’s energy demand will be greatly reduced and what energy is needed can mostly be generated on site via smart use of renewable energy technologies; environmental performance will be improved to almost net zero carbon. 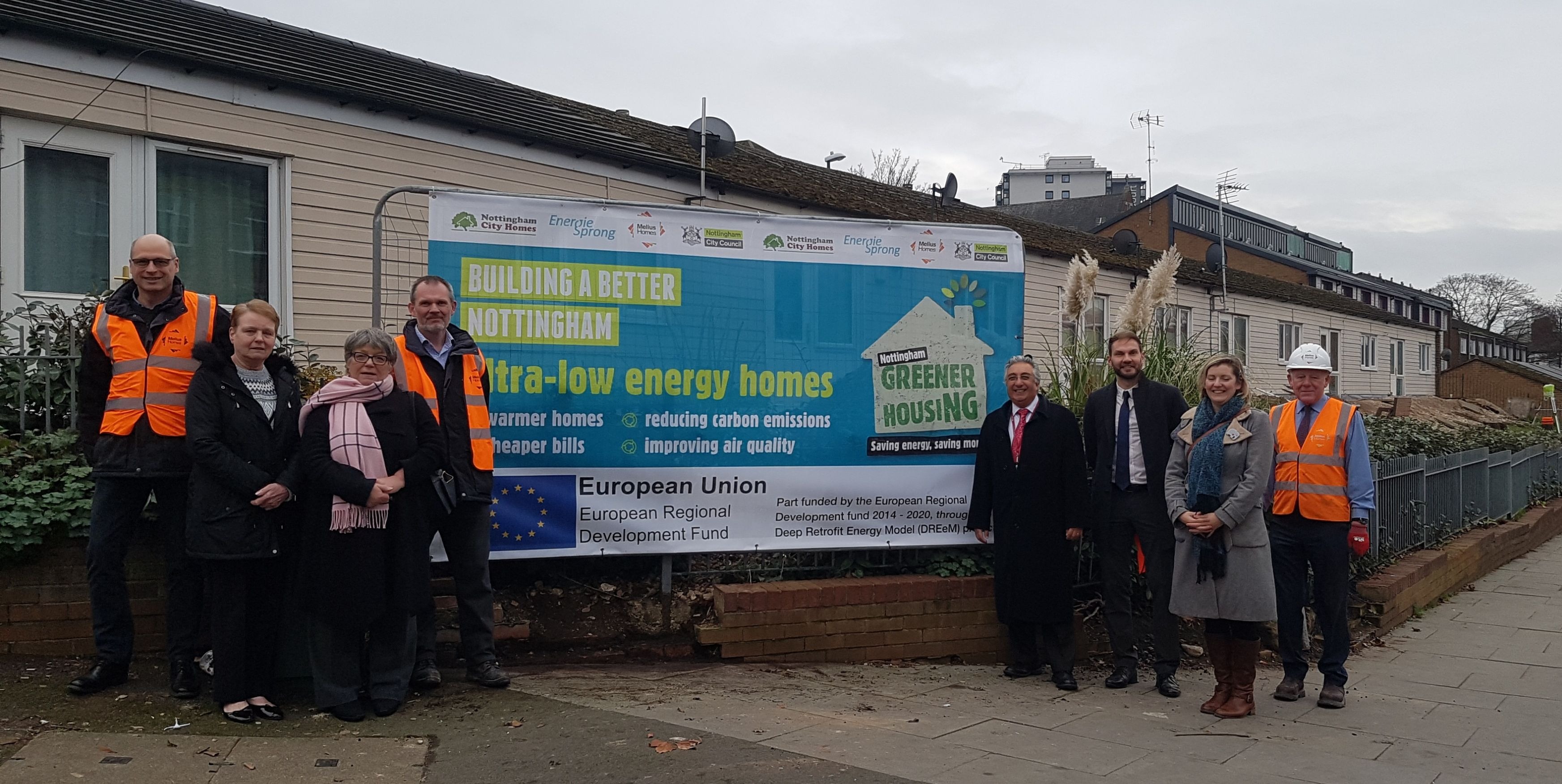 The model has been further developed and this rollout includes energy efficiency improvements to a city school and a number of homes in Derby managed by Derby Homes.

Melius Homes, who were the successful contractor for the pilot and the rollout tender, will be continuing in their role as principal contractor.

An NCH tenant from the initial pilot, Ms Esther Lutzuver, said: ““These homes were really cold before and I dreaded winters. Before the energy efficiency works I was planning on moving as the cold was just getting too much. I really can’t believe the difference the refurb has made. Last winter was so much better, me and my family found the house to be really warm and my energy bills have not got more expensive in fact I’m paying less. I’m so happy living here now, I’m no longer thinking of moving, I’ve recently redecorated the whole house and I’m saving up for a new carpet.”

Councillor Sally Longford, the City Council’s Portfolio Holder for Energy and Environment, said: “As the city’s largest landlord it’s right that we that we tackle energy inefficient homes as all that wasted energy impacts on our climate change ambitions as well as being expensive for our residents. We have already achieved a lot through our Greener HousiNG programme and we are determined to do more. Our recently launched Fuel Poverty Strategy sets out a bold vision to build on our successes by embracing new technology and innovations to ensure we do all we can to tackle high energy bills, cold homes and climate change simultaneously.

“We’re very excited that Nottingham is at the forefront of this revolutionary approach, we’re not only improving people’s homes locally, but also helping to shape a new direction for tackling the UK’s coldest homes.”

Nottingham City Council, Head of Energy Services Wayne Bexton. Said “Collaboration and innovation has been needed to bring about this rollout which represents a new chapter in decarbonising our social housing stock. Energy Services work on a number of innovative projects across Nottingham’s built environment to support the council and our commercial customers move to a low carbon future. The ambition from the pilot has been ramped up to include a school and we are keen to build on the model to cover a broad spectrum of buildings.

Nottingham City Homes Chief Executive, Nick Murphy, said: “It’s important that we insulate our homes and make them more energy efficient for the future. As well as helping fight climate change this will tackle fuel poverty, making our homes warmer and cheaper to run.

“It’s a great start to 2019 to be rolling out the Energiesprong approach to so many homes. The first pilot homes look fantastic and have really lifted the local area; this rollout will really add to the regeneration of neighborhoods across the city.”

Melius Homes Managing Director, Rob Lambe, added “Nottingham City Homes is leading the way in the UK in adopting this transformational approach to whole house retrofit and we’re delighted to be delivering this ground-breaking project”

This rollout will be in two phases; Interreg NWE programme E=0 is supporting the first seventeen retrofits and a European Regional Development Funded project, Deep Retrofit Energy Model (DREeM) which aims to improve the efficiency of homes & public buildings in Nottingham is supporting the bulk of the rollout. The rollout follows a successful UK first pilot which was funded by European Union funding stream Horizon 2020, through a project called REMOURBAN.

The urgent environmental need to improve the energy efficiency of housing to zero carbon emissions has been widely accepted as essential if the UK is to meet its 2050 Climate Change targets. A recently launched report from the Institute of Engineering and Technology (The IET), ‘Scaling Up Retrofit 2050’, calls for a nationwide programme to boost the energy efficiency of existing homes through deep retrofit, stating that it’s the only way for the UK to achieve its carbon saving goals. The report cited the Nottingham Energiesprong pilot as an example of the type of housing programme that the UK needs to be looking at.

Critically, a recent report from the UN Intergovernmental Panel on Climate Change (IPCC) is calling for even tougher targets and immediate action to reduce emission levels to avoid catastrophic global warming temperatures. As governments assess what they need to do to meet this challenge the need to tackle the environmental performance of buildings is gaining traction. Buildings accounted for 19% of UK greenhouse gas emissions in 2017 and over three quarters of these emissions were from homes; a key area for emission reductions is the UK’s older housing stock.