The ICC Cricket World Cup 2019 Public Ballot opened today (Wednesday, 1 August) at 10am (BST), when ticket applications were opened to all members of the public, backed by a major marketing and PR campaign, welcomingly called Are you in?.

The Public Ballot will be open until 29 August and fans will be able to apply for each of the 48 fixtures, with tickets in each price band at every game available.

Following the unprecedented demand during the Cricket Family Ballot, fans are encouraged to apply for a wide selection of matches as the 10-team round robin stage provides plenty of opportunities for fans to see their favourite team.

The campaign’s launch film stars Freddie Flintoff, a cricketer who transcends popular culture, singing and dancing to the sound of Imagine Dragon’s On top of the world, inviting the public to join sports greatest carnival. It continues the marketing approach of putting fans, influencers and celebrities at the heart of the creative, reaching both inside and outside of the game to engage new fans with cricket.

To apply for tickets in the Public Ballot, applicants must register an account via the official Cricket World Cup Ticketing website. The pre-registration phase started on 17 July.

ICC Cricket World Cup 2019 Managing Director Steve Elworthy highlighted the importance of this milestone in the application process, and hopes it has the same success as the recent Cricket Family Ballot.

‘‘1 August is a day we’ve all been looking forward to as we welcome many potential future cricket fans to the sport. This a great chance for anybody who wants to attend the ICC Cricket World Cup and watch the most exciting and competitive cricket available, as the best teams in the world go head to head.

‘’Being the third most-watched global sporting event, we know there will be huge interest in next year’s World Cup. The Cricket Family Ballot was a recent indicator to how popular we expect this tournament to be, when over one million tickets were applied for.

‘’What’s more, with our price structure for this tournament, which we consulted on widely and used external experts, all games will be accessible for a large proportion of sports fans. Any revenue that we do make from the tournament will be invested back in the game as part of our commitment to grow cricket and engage with future generations.’’ 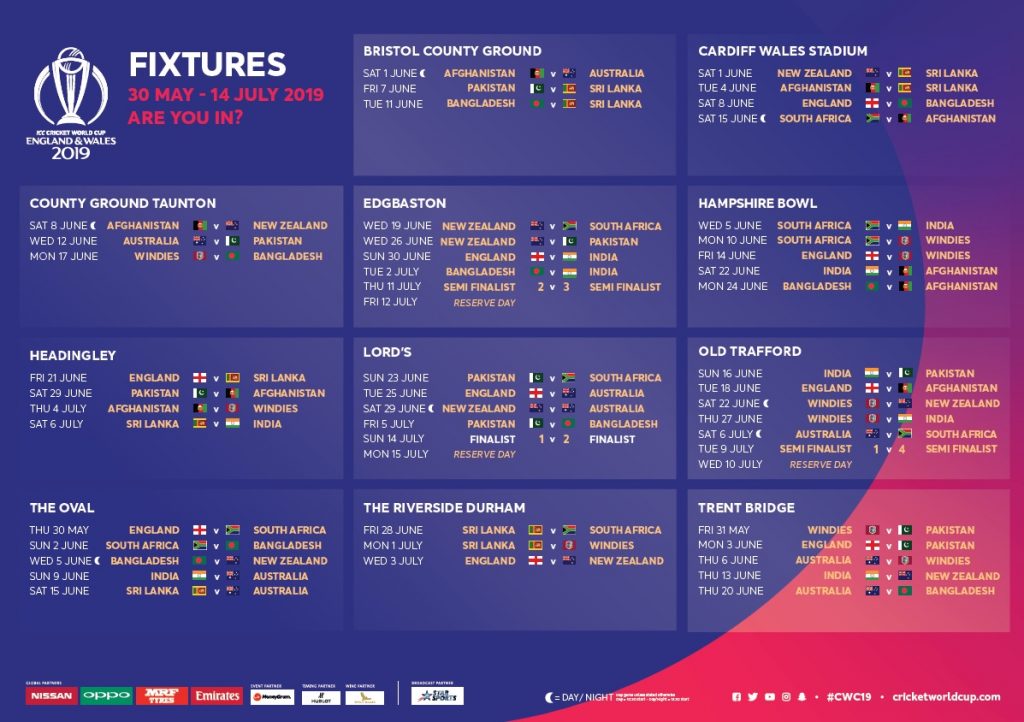 Hugh White, Director for Sport and Culture at Nottingham City Council, said “Nottingham is tremendously excited to be hosting five of the forty-eight matches and we are very proud to be working closely with our partners at Trent Bridge to host these games and ensure a very warm welcome to local, national and international visitors to the city.

There is no doubt the demand is going to be massive for tickets and I would urge everybody; from avid cricket fans to newcomers and families who may want to adopt a team, to get yourselves into the ballot so as to not miss the chance to experience this wonderful event.

Alongside the cricket, there will be so many attractions and other entertainments to enjoy that if you are lucky enough to get tickets, you are guaranteed an unforgettable day out. My advice is to apply for as many matches as you can and maximise your chance to take part in the celebrations as the ICC Cricket World Cup comes to Nottingham.”

This was echoed by Nottinghamshire County Cricket Club Commercial Director, Michael Temple, who said: “An ICC Cricket World Cup in England and Wales is a once in a generation event and we’re looking forward to welcoming the world to Trent Bridge.

“The ICC Cricket World Cup has a proud history and this is the fifth time that tournament matches will be held here. It’s the biggest version of the tournament so far and we hope that our members and supporters get behind the games.”

Host nation England will open the tournament at The Oval on 30 May when they take on South Africa, while reigning champions Australia start their title defence on 1 June against Afghanistan in a day/night match in Bristol. The World Cup will conclude when the final takes place at Lord’s on Sunday 14 July.

Any remaining tickets from the Public Ballot will go on general sale on a first-come, first-served basis later in 2018.

ABOUT THE ICC CRICKET WORLD CUP 2019

• The tournament will run from 30 May to 14 July. The semi-finals will be played at Old Trafford in Manchester and Edgbaston in Birmingham on 9 and 11 July respectively, while Lord’s will host the final on 14 July. The three matches will have reserve days

• The 10 teams in the tournament will play against each other in a single-league format, with the top four sides after 45 matches to qualify for the two semi-finals