The new developments were approved at Nottingham City Council’s Planning Committee today and form key parts of the proposed £250m redevelopment of the Broadmarsh area of the city.

The new car park and bus station development will include a 1,378 space car park, high quality retail units on Carrington Street and Collin Street, and a new state of the art bus station for bus users and including charging points for electric cars on each floor. Clad in terracotta tile and glass, the new building is a radical change from its concrete predecessor. 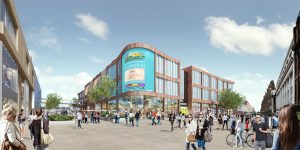 Retail units in the new building will feature double height windows for new shops, offering those using the newly pedestrianised area choice and variety, which complements the redevelopment of intu Broadmarsh.

The new City Hub development will see the land next to the tram bridge on Canal Street turned into Nottingham College’s flagship campus building, with the public realm between the current Broadmarsh area and the new college also due to be revamped. 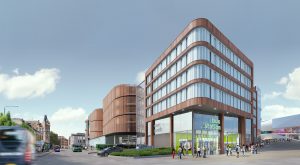 Work on the £58m College City Hub is due to start in the summer of 2018 and will be ready to welcome its first students in 2020. The six storey building will be home to a range of curriculum areas housing around 2000 students including business, admin and computing, travel and tourism, science provision, some creative provision, catering and hospitality, care and early years courses and more. It will also house a new café, new training restaurant, performance theatre and business hub so that businesses will co-exist alongside the College.

“Completing this work will have its challenges. I’m sure most people understand that we need to invest in the area to change the southern entrance into the city, and as a result we will create jobs and opportunities for local people.”

“It is our aim to bring to Nottingham something truly 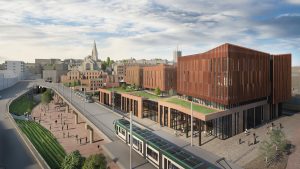 special, something more than a traditional college campus and which is a unique space in which business and education co-exist to the benefit of both. With the College’s plans for its other centres of excellence across the City Nottingham College will be one of the biggest and best-resourced education and training institutions in the country.

“We’re confident that these plans will benefit not just our students, who deserve a first class learning environment, but also local businesses and the wider community.”

£25million has been earmarked for the Southern Gateway/Broadmarsh development by the D2N2 Local Enterprise Partnership; the private sector-led partnership promoting economic and jobs growth across Nottingham, Nottinghamshire, Derby and Derbyshire. An initial £10m of this has already been awarded to the major project, with an application for a further £15m expected from the project’s promotors (Nottingham City Council) by summer 2018. 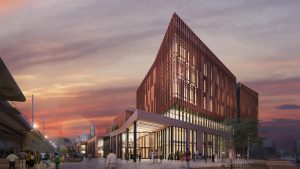 Up to half the cost of the Nottingham City Hub (up to £30m) will also come from D2N2 funding resources, subject to the business plan submitted by Nottingham College and its partners. This application is expected to be submitted, to the D2N2 Infrastructure and Investment Board, next month (March).

Both projects funding will come via D2N2’s £250million Local Growth Fund allocation. This is funding awarded to the LEP, via Government, to enable it to co-fund major infrastructure projects which directly help the local economy and grow jobs numbers in its area.