The Government is locking Nottingham City Council out of its plans for more council house building.

The Secretary of State for Housing, Communities and Local Government James Brokenshire has announced £1bn of additional funding for house-building – but has overwhelmingly made this available to councils in the south of the country.

Mr Brokenshire has said he wants “to see a new generation of council house building” – something the City Council is keen to be part of. But he has restricted it to councils where private rents outstrip social rents by at least £50 a week. This limits eligibility to bid for the funding to 165 councils – the vast majority of which are Conservative-controlled authorities in the south of the country. 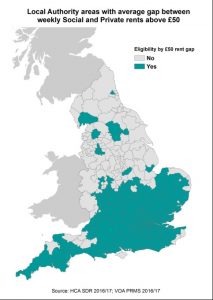 Some of the councils that have been granted the flexibility to bid for the borrowing allocation are the wealthiest in the country, many do not have any council houses any more and are unlikely to want to build new council houses in any case.

Rushcliffe Borough Council is one of the councils with the chance to bid for these funds, which the city welcomes. But on the northern bank of the River Trent, Nottingham City has been prevented from bidding. ‘Nottingham City proportionately has four times as many households on the housing waiting list as Rushcliffe, and over seven times the number of homelessness acceptances as Rushcliffe.’

Nottingham City has shown it has the ambition to build, making the most of existing resources to build the biggest programme of new council housing in a generation, to award-winning standards of construction and design. Nottingham was all set to go ahead building more homes, but is being prevented from helping the Government meet its own target of building 300,000 new homes a year.

Deputy Leader Cllr Graham Chapman said: “The Government claimed housing funding would be made available to ‘high demand’ areas – yet the formula used to decide who can apply does not look at ‘demand’ at all, using figures we dispute. They have once again favoured wealthy southern councils over councils in more disadvantaged areas in the Midlands and the North.”

Portfolio Holder for Planning & Housing, Cllr Jane Urquhart, who has written to the Secretary of State to raise her concerns, said: “There’s a housing crisis in England. We are building homes for local people and want to build more – but the Government is tying our hands.

“This is a wasted opportunity by the Government to address the shortage of affordable housing across the whole of the country. It makes no sense to favour wealthy areas over more deprived areas which are in greater need.”