British number three Cameron Norrie will play at the Nature Valley Open in Nottingham in June. 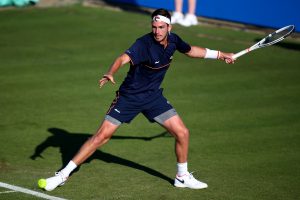 The 22-year-old shot to fame in Britain’s Davis Cup tie with Spain in Marbella in February when he came from two sets down to beat Roberto Bautista who was ranked 91 places above him.

Norrie was a top-10 ITF junior player and turned professional last year. He has since received a wild card for the opening round at Wimbledon and reached the second round at the US Open to take his world ranking to the cusp of the top 100.

Norrie said: “I’m really looking forward to coming to Nottingham to play on the excellent grass courts. I know that the courts there will be a fantastic preparation for me as a lead up to Wimbledon as it will be a good opportunity for me to get used to the grass and to play well in the event.”

Tournament director, Paul Hutchins, said: “We are really pleased that Cam is coming to the tournament. He has had an interesting career since being a top-10 world junior and player recently representing GB in Davis Cup action against Spain where he played unbelievably well to beat top clay-court specialist Roberto Bautista.

“Before turning pro in 2017, Cam was a top All American College player at Texas Christian College and has adapted well to the ATP Tour, recently qualifying in two ATP Masters events in Indian Wells and Miami. It will be good for the Nottingham public to welcoming Cam.”

Norrie was born in South Africa to a Welsh mother and Scottish father before moving to Auckland at the age of three and he went on to represent New Zealand in junior tennis.

Leon Smith, the British Davis Cup captain, saw his performance in Spain earlier this year at first-hand and he believes the Nature Valley Open will be a great place for Norrie to play.

“Yet again the Nottingham Challenger will provide our British players with an excellent opportunity to compete against a world-class field of players on some of the best grass courts available in the country.

“The event provides players with ideal grass court preparation leading into Wimbledon and the other major events in our summer calendar.”

Tickets are on sale now at the tournament website