Nottingham City Council and partners invite you to the Old Market Square tomorrow (Saturday 10 February) to celebrate 2018 – Chinese Year of the Dog. The events have been organised in conjunction with the Chinese Student Associations of the University of Nottingham and of Nottingham Trent University. 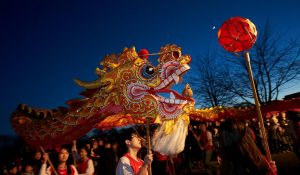 In a colourful mix of sights and sounds, the fun starts at 10:30 with an official opening ceremony involving representatives from Nottingham City Council and from Ningbo government (Nottingham’s Chinese sister city). The first round of performances begins at 11am with a mixture of singing, Chinese instrument playing, and traditional dragon dances, as well as some Chinese opera.

Alongside the performances, the Temple Fair offers opportunities to see and participate in activities which regularly feature as part of China’s New Year celebrations. There will be arts and crafts including calligraphy and paper cutting; storytelling, music and dance. There will also be food stalls with ample opportunities to try out some authentic Chinese New Year foods.

Celebrations also include a photography exhibition, which is a great opportunity to explore Hemudu, an ancient town with over 7,000 years of history in Ningbo, China. 96 photos will tell the story of its fascinating and unique landscape, culture, heritage and development.

The events have been made possible with sponsorship from Shanghong Shelf Company (an inward investment success to the region) and Hemedu (The city received visitors from the Ningbo government before Christmas including Party Chairman for the Hemedu township in Ningbo).

Nottingham’s relationship with Ningbo – a port city of 7.6m people south of Shanghai, began in 2005 when the University of Nottingham became the first foreign university to set up a campus in China.

Event organiser Dr Jason Yu, Assistant to Chief Executive for China Relations at Nottingham City Council said: “I would particularly encourage everybody to come along and celebrate with the community at the Chinese New Year celebrations in the Old Market Square this Saturday. I believe there will be something for all ages with lots to see and do and so much to learn about our culture and the links between the city and China.”

The full list of performances for the day is listed below: