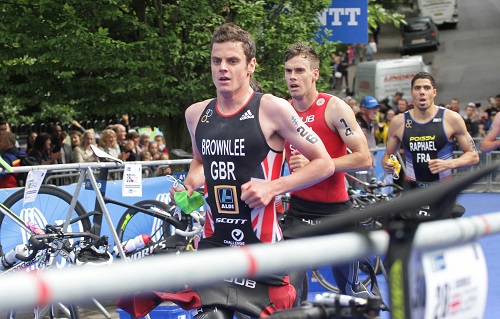 Nottingham’s Victoria Embankment is expected to come to life on the evening of Thursday 7 June, as national squads from the world’s top 18 triathlon nations line up at 6:30pm in front of thousands of spectators. They’ll battle for the top step of the podium, and all important Olympic qualification points for Tokyo 2020. Mixed relay squads will comprise two men and two women, with the final team selections being made in the immediate hours prior to the event.

A relatively new racing format to enjoy, mixed relay is fast and thrilling, with athletes racing over much shorter distances than spectators are used to seeing. With the action taking place in little over an hour’s time, the event is hoping to attract families, sports fans and those completely new to triathlon to the Embankment for an evening on non-stop entertainment.

Jonathan Brownlee, Olympic silver medallist, said: “The addition of mixed relay to the Olympic programme in 2020 is massive for our sport. It’s exciting, fast paced and extremely spectator friendly, and I’m sure Nottingham will put on a fantastic show.”

Andy Salmon, British Triathlon CEO, said: “We are thrilled to announce a strong British squad for the very first Accenture World Triathlon Mixed Relay Nottingham. With an additional Olympic medal now on offer in Tokyo in two years’ time, it’s clear to see the level of importance nations have put on mixed relay and it’s fantastic to be able to showcase this to an engaged Nottingham audience.”

Jon Collins, Leader of Nottingham City Council, said: “This is a chance to see some of the best triathletes in the world, including Jonathan Brownlee and Vicky Holland. It’s not often we get a world class events with world class athletes of this calibre in the city, and last year’s event shows how exciting relay triathlons actually are. It might be a Thursday evening, but this will be a great event for people to come and see, whether its standing around the course for free or paying a bit extra for grandstand seats.”

Aside from the elite action, there’s plenty to enjoy on the Embankment in three weeks’ time. With face painting, a pre-event parade and local mascot race to keep families entertained, there are also food and drink stalls dotted around the course for those that simply want to sit back and soak up the atmosphere.

Tickets are still on sale for the grandstand, allowing the best view of the stars from the moment they dive into the River Trent, all the way to the finish line. Starting at £13.50 (plus booking fee), they can be purchased at Nottingham.triathlon.org/tickets.

For those wanting a taster of the course themselves, a number of mass participation race opportunities are taking place from 1:15pm the same day. Whether you want to team up as a trio and take on a discipline each, or tackle to entire course yourself, book your spot on the start line before entries close at midnight Wednesday 23 May at Nottingham.triathlon.org.

Accenture is a leading global professional services company, providing a broad range of services and solutions in strategy, consulting, digital, technology and operations. Combining unmatched experience and specialized skills across more than 40 industries and all business functions – underpinned by the world’s largest delivery network – Accenture works at the intersection of business and technology to help clients improve their performance and create sustainable value for their stakeholders. With more than 435,000 people serving clients in more than 120 countries, Accenture drives innovation to improve the way the world works and lives. Visit us at www.accenture.com

The ITU is the world governing body for the Olympic sport of triathlon and all related MultiSport disciplines. ITU is proudly committed to supporting the development of the sport worldwide through strong relationships with continental and national federations, working with its partners to offer a balanced sport development programme from grassroots to a high performance level. www.triathlon.org