Four local heroes who have helped the homeless, parents and children in disadvantaged communities, disaffected young people and children with disabilities, have been honoured in the Nottingham Awards 2019.

The awards, now in their eighth year, were held at the Council House last night (Thursday) following the historic 725th Goose Fair opening and dinner.

They celebrate those who have helped to make Nottingham the great city that it is, and each winner has made a lasting contribution. The awards are a way of recognising that achievement and an opportunity to say thank you. The categories and winners for 2019 are: 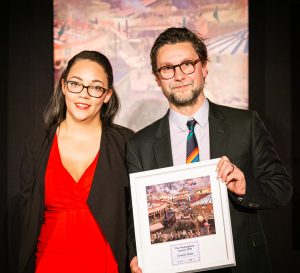 George has turned his live music business DHP Family into a major brand, with local venues such as Rock City, the Rescue Rooms and the Bodega now nationally and internationally known names, along with iconic venues in London and Bristol. DHP Family has won the national promoter of the year award on a number of occasions, and undertook the world’s biggest ever tour with Ed Sheeran.

The award is in recognition of George organising the Beat the Streets festival to raise money for homeless people, which has raised almost £200,000 for Framework over the past two years. The festival runs across all DHP venues and other venues in Nottingham, with gate receipts and bar takings all donated to the charity. This has supported a shelter for homeless people to run throughout the year. 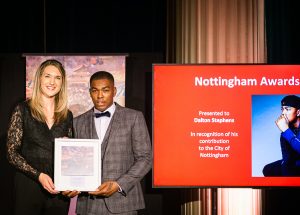 Dalton Stephens is well known in St Ann’s where he has lived since being young, when he made some poor choices, and is now known for turning his life around dramatically over the last five years. He has gone on to help young people in the city to widen their horizons by sharing his negative experiences and consequences of his past, helping them avoid going to prison.

As a volunteer he has established and developed a successful all-year-round weekly sport session in a local park, helped to develop relationships between the community and local police and engaged young people through a community recording studio. 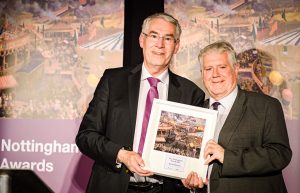 David Stewart has benefited many Nottingham children and families, some of whom have very complex needs. He has been described as a great role model of kindness, passion, determination, and effective teaching. He retired as Head of the Oak Field School this summer, having previously been Head at Nottingham Shepherd School.

For nearly 30 years he directed the College St Inclusive Theatre Company, which won an Edinburgh Festival Fringe First. He oversees several arts clubs for adults with learning disabilities in the city. David is internationally recognised for his work and is an honorary doctor of the University of Nottingham. 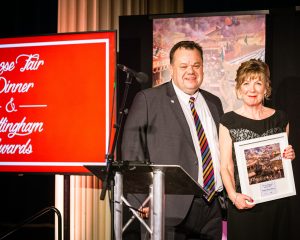 It is 40 years since Phyllis Brackenbury became a midwife at Nottingham City Hospital. Since then she has worked with children and families as a midwife, or in leadership roles within the NHS, Nottingham CityCare and Nottingham City Council. She became a parental participation manager in ’Sure-Start’ in St Ann’s and developed centres in Radford and Hyson Green. She then oversaw extending the provision of eight Sure Start Centres to 18 Children’s Centres.

In 2014 she led a successful bid which brought the £45 million ‘Small Steps, Big Changes’ (SSBC) to Nottingham, which has so far improved the life chances for 3,500 0-3 year olds in Aspley, Bulwell, Hyson Green, Arboretum and St Ann’s. Phyllis also played a leading role in Nottingham becoming the UK’s largest Imagination Library to encourage children to read.

Over the past few years, a number of notable local people have received the Nottingham Award, including the super-talented Kanneh-Mason family, Jim Taylor, the man behind the city’s tram; Derek Brewer, former cricketer and chief executive of Nottinghamshire County Cricket Club; and Sat Bains, the Michelin-starred chef and restaurant owner.

Councillor Rebecca Langton, Portfolio Holder for One Nottingham, said: “The people who have received a Nottingham Award this year are very worthy winners who have made a real and lasting difference to the lives of vulnerable local people.

“It’s right that we recognise their contribution to the life of the city and thank them on behalf of the many people who have benefited from this. People like these make Nottingham what it is – a warm, welcoming and inclusive city where people look after each other.”