Today, Thursday 19 April, nearly 800 school children marked the 50-day countdown to the Accenture World Triathlon Mixed Relay Nottingham by getting a taste of the sport themselves. 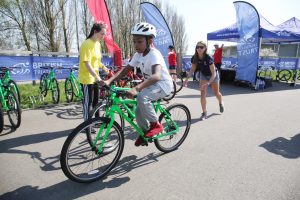 The city’s Harvey Hadden Sports Village hosted the ‘mini-tri’ event, inviting youngsters to dip their toes into the sport by completing a mini swim, bike and run, cheered on by 2018 Commonwealth Games triathlete, Olivia Mathias.

More than 15,000 spectators gathered at the very same site in 2017 to witness local hero, Mathias, take on the course in a race which eventually saw 2018 double Commonwealth silver medallist, Jess Learmonth, claim mixed relay gold with her team.

This time around, a British quartet will face 17 of the world’s best triathlon nations in a battle to secure their spot on the Tokyo 2020 Olympic start line.

Cllr Dave Trimble, Portfolio Holder for Leisure and Culture at Nottingham City Council said: “The event today helped to interest our school children and their parents not only in the Mixed Relay the Victoria Embankment on 7 June, but also in the idea of taking up triathlon as a sport.

“Harvey Hadden is a fantastic venue in which to train and our other leisure centres across the city can also support people in achieving their fitness and sporting ambitions.”

Olivia Mathias, 2018 Commonwealth Games triathlete, said: “It’s great to be here and see the kids get excited about what’s to come in June. Triathlon is a fantastic sport to be involved with regardless of your age or ability and this will be showcased in 50 days when everyone from triathlon beginners to elite performers perform on the same course.” 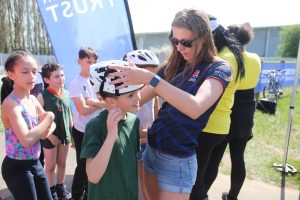 Andy Salmon, British Triathlon CEO, said: “Following the recent success of Team England’s Mixed Relay squad out on the Gold Coast for the Commonwealth Games, the nation has had a taste of what will be in store in Nottingham in less than two months’ time and the excitement is building.

“I’d encourage the City of Nottingham to mark Thursday 7 June in the diary and look forward to an evening of thrilling triathlon action.”

Grab tickets
For those wanting to head down after work to soak up the atmosphere, grandstand tickets are still on sale for the Accenture World Triathlon Mixed Relay Nottingham and start at £13 (plus booking fee). The event was a sell-out in 2017 so book soon to avoid missing out at https://goo.gl/BvSPxA

Take part
Fancy taking part yourself? Whether it be your first triathlon and you’re keen to get started with the GO TRI event, you’re wanting to share the effort with friends in a relay team, or you’re looking to beat the clock and take on the sprint distance, there is an event for all. Book your place at Nottingham.triathlon.org